In 2016, the Kuehne + Nagel Group once again achieved profitable growth leading to new record highs in both earnings for the year with CHF 720 million and EBIT margin at 5.6 per cent. 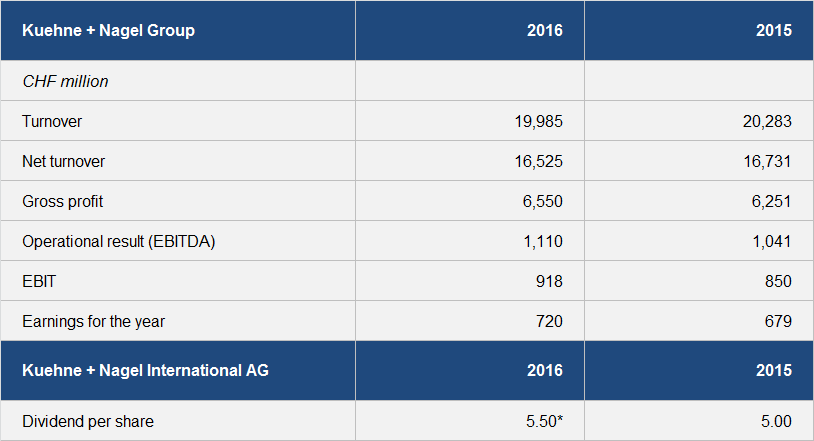 Dr. Detlef Trefzger, CEO, Kuehne + Nagel International AG: “We set ourselves ambitious targets for 2016 and we are pleased of having achieved them and to report a new record result. In a market environment characterised by multiple challenges, we were successful with our focus on customer requirements, our solution-oriented approach and our balanced service portfolio. In all business units we gained market shares while further increasing overall profitability. Thanks to our portfolio of scalable industry-specific end-to-end solutions and our operational efficiency, we are well positioned for continued profitable growth, which we will accelerate by selected acquisitions.”

Development of the business unitsSeafreight
In 2016, the number of TEU handled by Kuehne + Nagel exceeded the 4 million mark for the first time. With a volume increase of 6.1 per cent, the Group grew twice as fast as the market. The Less-than-Container Load (LCL) volume increase and the successful development of the reefer container business are to be emphasised. Renowned customers from the pharmaceutical and healthcare industry rely on Kuehne + Nagel when it comes to handling their temperature-sensitive products. Kuehne + Nagel was not able to fully avoid the effects of the ongoing shipping crisis, which became apparent in 2016 above all in terms of historically low freight rates and pressure on margins, as well as the weak development in the oil and gas industry. Despite productivity increases, EBIT declined by 3.1 per cent in comparison to the previous year, whereby the EBIT-to-gross profit margin (conversion rate) could be maintained at an industry leading high level with 31.4 per cent.

Airfreight
Airfreight delivered a very pleasing performance. In a volatile international airfreight market with growth only picking up in the fourth quarter, Kuehne + Nagel increased tonnage by 4.3 per cent to 1,304,000 tons, therewith expanding its position as number 2 among the global airfreight providers. Its focus on industry-specific airfreight solutions such as KN EngineChain, a specialised service package for production and spare parts logistics as well as the maintenance of aircraft engines, was a key success factor. Kuehne + Nagel's leading solution for temperature-sensitive goods, pharmaceutical or perishable products, generated significant new business. The improved margins and operational efficiency led to further growth in profitability. The conversion rate increased from 29.3 per cent in the previous year to 30.9 per cent. The EBIT improved by 12.5 per cent in comparison to the previous year.

Overland
Kuehne + Nagel increased net turnover in 2016 by 11.9 per cent due to the systematic expansion of the overland activities within and outside Europe. Following the integration of the United States overland transport provider ReTrans, which has been part of the Group since 2015, Kuehne + Nagel customers in North America benefit from intermodal transport services. Overland activities were increasingly integrated into industry solutions provided by the other business units. The increase in gross profit by 7.3 per cent as well as the improvement of the operational performance resulted in a significantly higher EBIT.

Contract Logistics
Focusing on specialised end-to-end solutions for industries such as automotive, e-commerce, high-tech, consumer goods, aerospace, pharmaceuticals and healthcare again resulted in new business wins with a subsequent rise in net turnover by 5.7 per cent in constant currencies. In 2016, more than 100 new logistics projects were implemented for customers; the Group now managing more than 10 million square metres of warehousing and logistics space. The attractiveness of the service portfolio and the quality of implementation as well as continuous process improvement led to a considerable EBIT increase of 23.5 per cent.

Net Turnover
After customs, duties and taxes, the Kuehne + Nagel Group achieved a net turnover of CHF 16,525 million in 2016, which corresponds to a decline by 1.2 per cent in comparison to the previous year. This was due to historically low rates in sea and airfreight as well as negative foreign currency effects. While net turnover increased by 1.7 per cent in Asia-Pacific, it declined by 3.2 per cent in the Americas and by 1.0 per cent in EMEA.

Gross Profit
Gross profit, which is the better performance indicator for a logistics company than turnover, was with CHF 6,550 million 4.8 per cent higher than in the previous year. Negative currency effects had an impact of1.4 per cent. Gross profit improved by 8.1 per cent in the Americas, by 5.9 per cent in Asia-Pacific and by 3.8 per cent in EMEA.

EBITDA
Earnings before interest, tax, depreciation, amortisation and impairment of property, plant and equipment, goodwill and other intangible assets (EBITDA) increased by 6.6 per cent to CHF 1,110 million compared to the previous year. Currency effects had a negative impact of 0.8 per cent. EMEA generated the largest EBITDA contribution with CHF 647 million (58.3 per cent), followed by the Americas with CHF 245 million (22.1 per cent) and Asia-Pacific with CHF 218 million (19.6 per cent).

EBIT
In 2016, earnings before interest and tax (EBIT) improved by CHF 68 million to CHF 918 million. The rise is primarily due to the improvement in profitability. Foreign currency effects had a negative impact of 0.8 per cent.EMEA contributed CHF 509 million (55.5 per cent) to the Group's EBIT, followed by the Americas with a contribution of CHF 207 million (22.5 per cent) and Asia-Pacific with CHF 202 million (22.0 per cent). The EBIT margin of the Group amounted to 5.6 per cent.

Dividend
The Board of Directors will propose a 10 per cent higher dividend of CHF 5.50 (previous year: CHF 5.00) to the Annual General Meeting on May 9, 2017.Dr. Joerg Wolle, Chairman of the Board of Directors of Kuehne + Nagel International AG: “The Kuehne + Nagel Group is in excellent shape and in a strong competitive position. Based on the 2016 full-year results, the company can look forward to the future with confidence. Competence, professionalism and the high level of commitment among all employees worldwide, a proven long-term strategy, efficiency and effective cost control are the drivers for success. The Board of Directors thanks the Management Board for the very good performance.Both, the Management Board and the Board of Directors will face the challenging market development and competitive environment with focus and full commitment.”

Annual Report 2016
Further information on the 2016 full-year result and the annual report 2016 are published on https://annual-report.kuehne-nagel.com